MAKING UP THE HUNDRED


"Oh, Jack, you don't mean to say it is gone!" Louise leaned over her brother's shoulder and began scrambling about among the papers in the little desk drawer.

Jack sank back in the chair, his face white as a sheet. "I haven't been in this drawer since father put it here and told me to take it up to the Judge at the end of the month. Oh, Sis, what shall we do? I suppose we'll have to tell dad, and he'll think I'm careless, and anyway, he told me he was very short, and he depended on me!" finished Jack dismally.

"It wasn't YOUR fault," championed Louise stoutly. "Some one must have taken it. Wait, I'll tell Aunt Jennie." The little old lady had just whisked into the room and Louise hurled herself upon her. "The money dad left for the rent is GONE!" she screamed excitedly.

"There, there, don't be rude!" Settling her brooch, Aunt Jennie drew away from Louise. "No," said she crossly, "you can't have honey for luncheon. I don't care what your dad said!" Aunt Jennie was deaf, but never allowed any one to notice the matter. "Young ladies did not shout so when I was young," she added acidly, passing out into the hall.

"No use trying to make HER understand - we'll just have to think of something - we'll have to earn some if it. I've got ten dollars of my allowance left and that's a start!"

"Do you think we could?" Jack hunched up a bit and regarded Louise doubtfully. "Anyway, we've got a month and we needn't write dad yet!"

"Let's get a paper and put down everything we have," suggested Louise energetically. "I'll sell the rags and papers and that ought to bring in about a dollar."

"I've got $3.50," exclaimed Jack, digging ruefully into his pocket.

"Look in the paper!" announced Jack, springing out of his chair. They both pounced upon the paper that lay on the table.

"You read the male help wanted and I'll read the other!" said Louise. With anxious fingers they followed down the long column, but there seemed nothing that a fourteen-year-old girl and a thirteen-year-old boy could do.

"Bother!" cried Louise, jumping up. "I'm going for a walk. I can think better outdoors!" And out she went, leaving Jack still hunched over the paper.

Jack and Louise lived in a big, roomy mansion on the edge of the suburbs of Dayton and never until this year knew what it was to want money. The war had upset dad's business and a sudden trip abroad made him feel the necessity for reducing expenses. They had dismissed all the servants but the cook and gardener, and Aunt Jennie had come to look after them during their father's absence. How the rent money left in Jack's care had disappeared you already know.

Louise was thinking very hard as she sauntered down the shady walk to the gate. Then all at once she got her first idea and went plunging back into the house. She collided violently with Jack in the hallway, for, paper in hand, he had dashed out to find her. "Well!" spluttered Louise breathlessly.

"Here's a fellow wants some one to keep his dog for the summer--$3 a week to the right party--that means up--and just add $12 to our fund!"

"Where'd you find it?" gasped Louise, snatching the paper away from him.

"In the personals," remarked Jack loftily.

"Say! Look here: 'For housecleaning: party would like to rent a vacuum cleaner for week of 5th; will pay $1 a day for use. 1519 Cooper Terrace.' " read Louise! "Why, that's only a few blocks down. Gee! Isn't earning money fun? We'll get John to take it down for us - and, oh, yes, I forgot my idea. I heard the Judge tell Mr. Dalton the other day that he'd give a good deal for a decent pasture for his cow. What's the matter with ours - all fine clover and nothing in it?"

"Say, you're a wonder," whistled Jack. "I'll run right over and see what he says."

"And I'll go get John fixed," laughed Louise. "We'll have a zoo first thing you know."

Louise took old John, the gardener, into her confidence and he not only promised to deliver and call for the vacuum cleaner but suggested another source of money. "Miss Louise, deary, we've got more tomatoes than we"ll use in a month of Sundays. Do you want that I should sell some for you on the quiet?"

"You're an angel!" Clasping the astonished John around the neck, Louise danced in a circle and then rushed into the house to write to the vacuum cleaner and dog persons.

Jack returned from the Judge's radiant. "Said he'd pay us $10 a month!" he cried, tossing his hat up. "How much does that make?"

The next few weeks were the most exciting Jack and Louise had ever known. Every day they scanned the personals, they wrought a shrewd bargain with an old-clothes man, Jack sold two pairs of his rabbits to an advertiser--he had always given them away before. This brought the sum down to $51.50.

The dog proved a boon companion and all their negotiations went on without Aunt Jennie discovering anything. "It's a regular adventure," exulted Louise, returning from an animated debate with a scrap-iron man after extracting $3.20 for an old tricycle and some pipes. They invested some of their capital and advertised the cleaner--$8 more rolled into the treasury. "Only $40 to make the $100," sighed Louise at the end of the second week.

John made good on the tomatoes and proudly tuned over $7 to the children. Later he sold some peaches and netted them $6 more. An antique man, summoned by letter from Louise, purchased a broken little mahogany rocker for $6. Then for a time it seemed that they had nothing else to rent or sell. A harrowing week's work at addressing envelopes brought them another $7, and the final $14 were proudly earned by Louise. With the cook's help she put up three dozen jars of peaches and triumphantly disposed of them through the advertising columns of the paper.

Two days before it was due, Jack and Louise took the precious rent money to the Judge, their landlord. "But!" exclaimed he, eyeing the bundle of crumpled bills cunningly , "the rent IS paid!"

"Yes, your Aunt Jennie paid it about a week ago. Is anything the matter?" For Jack was staring in fury at Louise and Louise was stamping her foot with rage.

"The interfering thing. SHE TOOK IT, DID SHE, and after all our trouble." Excitedly the two poured out their story.

"So that's why you wanted my cow to board," chuckled the Judge. "Wait till I tell your dad. He'll be the happiest man alive. Actually earned $100. Why, I can't believe it!"

"And it's ours!" cried Louise, suddenly realizing her wealth.

"Gee! But I'm glad Aunt Jennie took it!" cried Jack, making a dash for the door. "Come on, Louise, let's talk about what we're going to do!"

It was a very proud daddy who heard the story when he returned and I don't blame him one bit, do you? 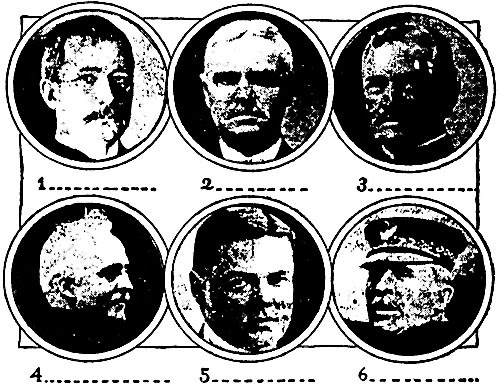 You did so well on the flag puzzles that Mr. G. Ography wants to try you on something harder. Who are these men? Write the numbers of the pictures on your list, and after each one the name and a short description. Send to Mr. G. Ography, care of the Boys and Girls' Department.

The flags were those of France, blue, white and red; Great Britain, white, red and blue, merchant flag of Britain; Rumania, blue, yellow and red; Russia, white and blue; Russian merchant, white, blue and red; Italy, green, white and red, with crest white and red edged with blue; Cuba, blue and white stripes, white star on red background; Belgium, black, yellow and red; Japan, white background, red circle; Serbia, red, blue and white. There were three flags alike before they were colored, each having three vertical stripes--France, Belgium and Rumania; and two others alike, having three horizontal stripes--Serbia and the Russian merchant. The flag in the center was, of course, our own Stars and Stripes.

[Answers next time. The faces above represent historical figures of 1917. This is a historical presentation of Ruth Plumly Thompson's writing, so please don't mail in entries. No prizes will be awarded.]