By W. W. Denslow
Author of The Scarecrow and Tin-Man of Oz, illustrator of The Wonderful Wizard of Oz, Dot and Tot of Merryland, etc. 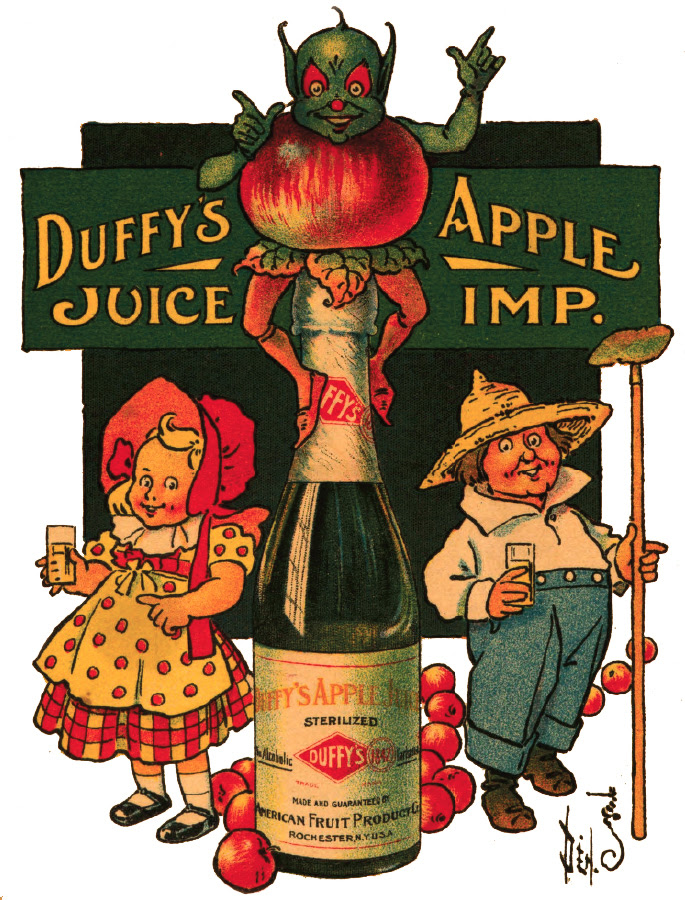 A little boy and little girl
Went out one bright spring day
To wander through the woods and fields
And find a place to play;
When lo! they heard a little voice
It almost was a scream;
'Twas from a funny fairy man
A splashing in a stream.

They went to his relief at once,
And pulled him to the land;
He thanked them very many times,
And took them by the hand;
"I am the Apple Imp," said he,
"The trees I tend with care,
That golden autumn may be crowned
With harvests everywhere. 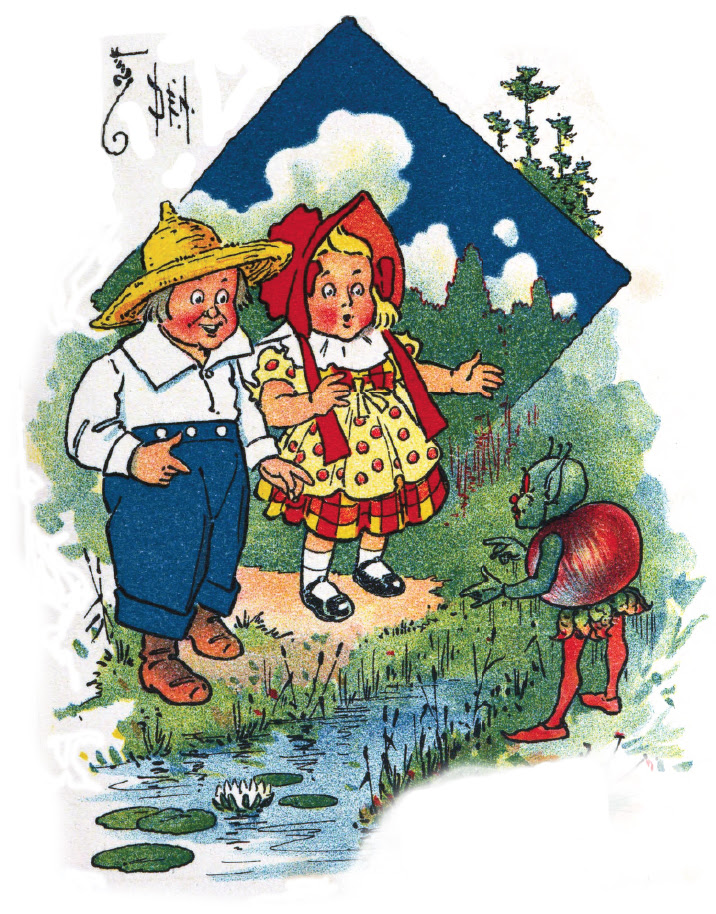 "In gratitude I give to you
This little apple seed,
'Twill give you health and happiness
And anything you need.
Go plant it in a pleasant spot,
All by the bright moonlight."
With that hue jumped into the air
And was soon out of sight.

The children did as they were bid,
Next day a sprout appeared;
They tended it with loving care
And soon a tree they reared.
The blossoms first came in the spring,
Green fruit in summer time;
Then luscious apples ripe and red
In golden autumn's prime. 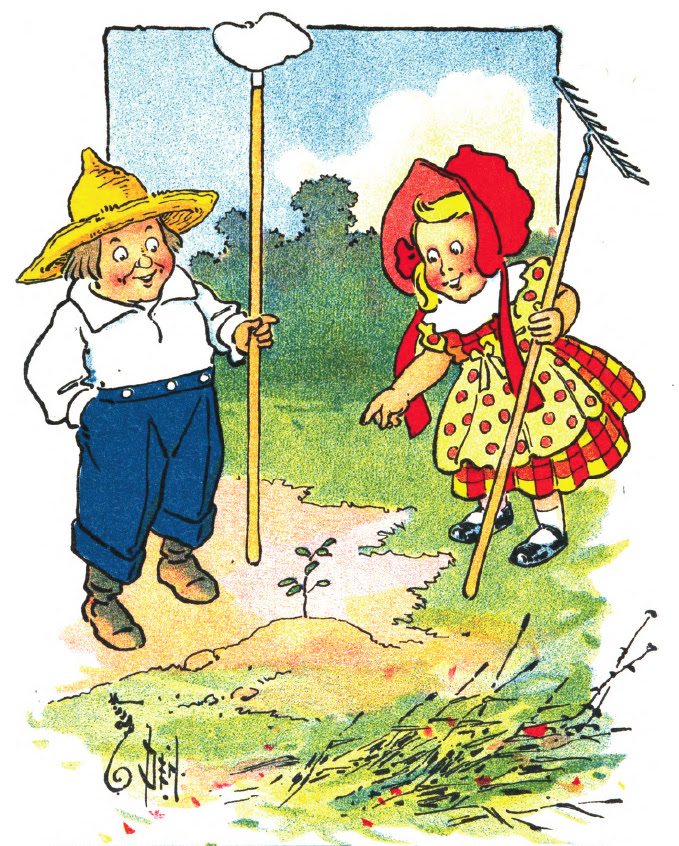 "Now fairies fair, make haste with care,"
Go pluck those apples sound;
Run out upon each bending branch
And bring them to the ground.:
So spoke the imp, and in a wink,
The fairies stripped the tree;
And piled the pippins on the grass,
A goodly sight to see. 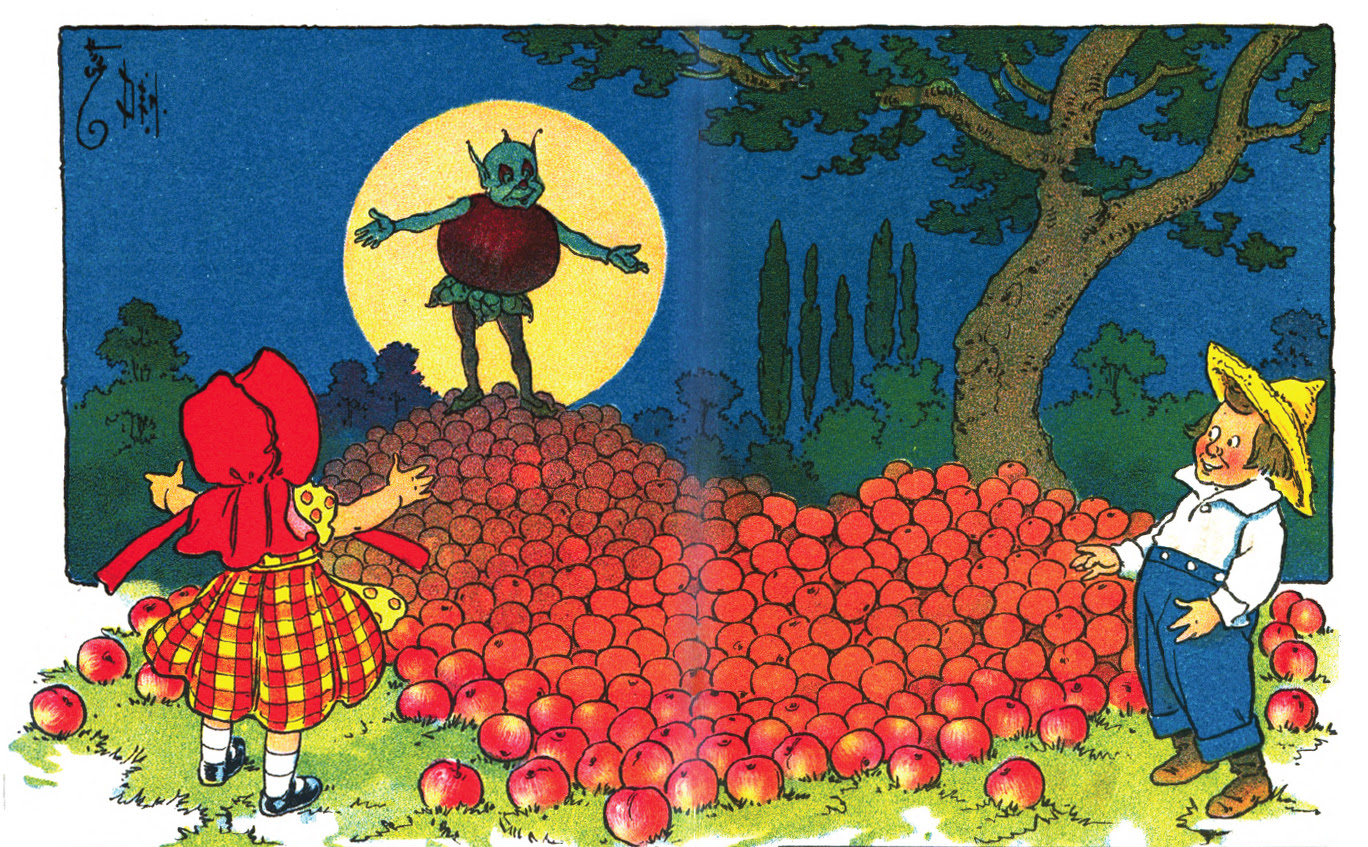 "Bring forth the magic auto car,
And as the wind is fair,
Instead of running on the ground,
We'll travel through the air."
This care was broad and deep and long,
With room enough for all,
The apples that grew on the tree,
The imp and children small.

The fairies loaded up the car
With rosy apples bright;
And soon the imp and children, too,
Were flying through the night.
Then as the golden-tinted sky
Showed that the morn was dawning,
They landed close by Duffy's door
At seven in the morning.

"This is Bets and this is Bob,
Two great good friends of mine,â€
The imp to Mister Duffy said,
"With something in your line;
For they have brought you apples rare,
Expressly for your use.
They'd like to have you make them
Your famous apple juice."

Mister Duffy was delighted
To get the goodly fruit,
For he was most particular
And very hard to suit.
When he is making apple juice
He always must be sure
To have the apples sound and good,
To make the product pure. 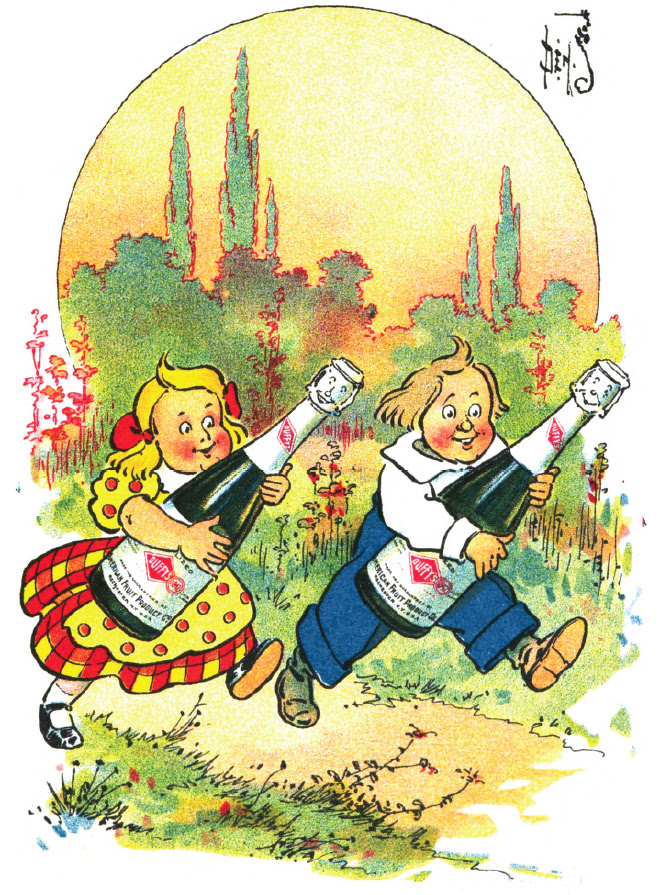 Full soon the car was homeward bound,
This time upon the road;
But now instead of apples ripe
It bore a liquid load--
All snugly packed in bottles neat,
With labels on the side;
So Bets and Bob were quite happy
And filled with honest pride. 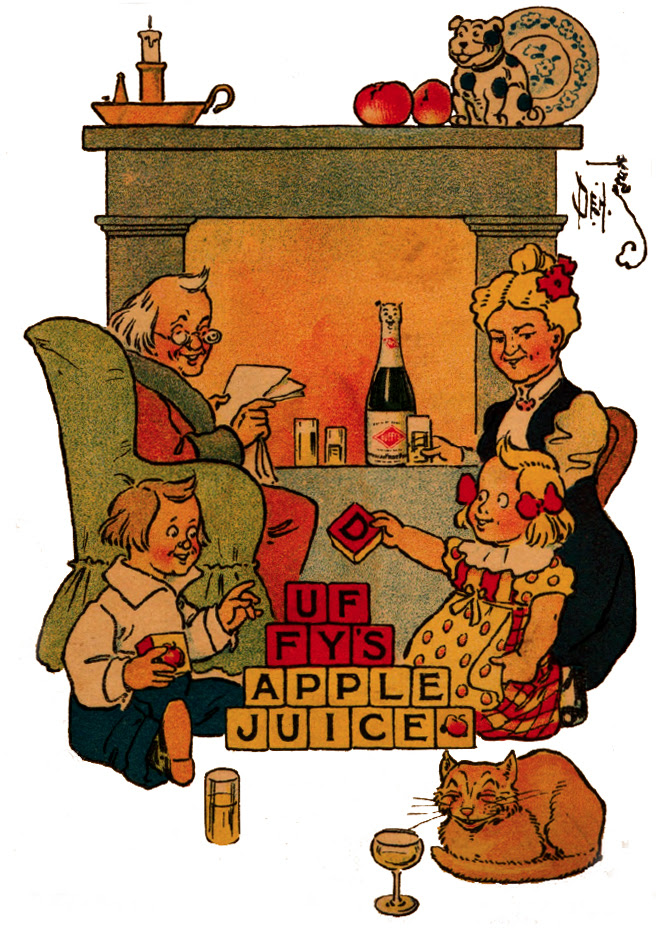 On evenings in the winter time,
If you don't come too late,
You'll find a happy family
All gathered 'round the grate.
'Twas Duffy's apple juice, Betsy Jane
And Bob, the sturdy boy,
That brought their family health and strength,
And filled their hearts with joy.

The queer creature received so many letters asking him what he did want for Christmas that he decided to answer them all in this week's verses.

What I Want for Christmas

Dear me, he'll have to tell the fairies about this. Modest? Oh, my! The words he forgot last week were size, use, hall, trees and cigars.