Author of The Wonderful Wizard of Oz, The Boy Fortune Hunters in the Yucatan, Daughters of Destiny, etc.

Originally published in the Chicago Times-Herald, 1895.

[Hungry Tiger Press presents the following short story as a tie-in with—or amplification of—the history of L. Frank Baum's experiences as a young actor touring the hinterlands in 1881 with a disreputable acting company, as detailed by David Maxine in his Vintage Broadway blog. The basic background situation is true to Baum's life, as Maxine shows in his blog post "Opening Prayer - Part 1." But the 1961 book To Please a Child, a biography of L. Frank Baum by Russell MacFall and Baum's eldest son Frank J. Baum, claims the events of "Played a New Hamlet" are fact. Did this story really occur as Baum tells it?]


"No," said the actor, as he put his feet on the opposite seat, threw his ulster over the head of the harmless old gentleman in front of us, and proceeded to light his corncob pipe, "life with a cross-roads aggregation ain't no snap. You traveling men think you lead hard lives, but as a matter of fact you don't know what trouble is. Why, I've worked for five companies since the first of October, and played every part you can think of except a bronze statue, and where am I now? On my way to join an Uncle Tom's Cabin company of the deepest dye! Wouldn't expect it in an artist and a gentleman, I know; but three meals a day are indispensable to my health and happiness, and I must do what I can till Henderson offers me the comedy part in his new extravaganza.

"Comedian? Not on your birthday; I'm a tragedian by instinct and education; but it so happened that I always have to play the comedy role wherever I go—fate, I suppose, or what those theosophist Indiamaniacs call Karma. I never remember playing a part to my liking but once, and that was under adverse circumstances. I did the ghost in 'Hamlet,' and it was this way: I'd joined a party of barnstormers who were playing week stands through the mining towns in Pennsylvania. We sported a brass band at one time, but they had skipped out and left us with nothing but a bass drum, that was of little use as an attraction; still we lugged it around with us. Well, one week we were at a coal town way up on the hills above the Two Lick, where the natives were as green as grass. The first night's performance was a great success, but at its close a committee of miners waited on us with a request that we play 'Hamlet' the next night. Our manager replied that 'Hamlet' was not a part of our repertory, but that we'd give 'em a much better show. The miners were evidently disappointed, and the leader said:

" 'See here, boss, we've got to have this Hamlet show or the folks'll git mad. None of us ever seen it, but there was a digger here last year as could talk of nothin' else but Hamlet, as was the greatest show ever played an' had a ghost to it. Now, you say as you're actors, but can't play Hamlet; we've talked with the boys, an' that's the play they all want. You give us that an' we'll pack the house for you.'

"The manager looked puzzled and undecided, and another miner noticed it and exclaimed:

" 'See here, cap'n, if you can't give us Hamlet why leave that out, but give us the ghost anyway.'

"The manager put on his sweetest smile. 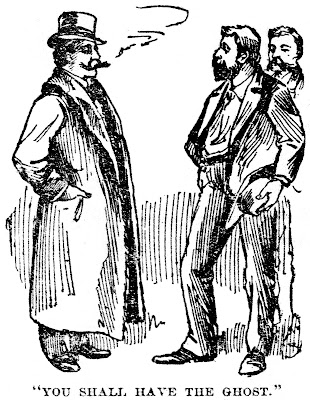 "The delegates thanked us earnestly and withdrew, while the members of the company turned upon their betrayer in anger and amazement.

" 'Who knows anything about Hamlet?' I asked.

" 'Who's got a copy of the play?' inquired the heavy man.

" 'Where's the costumes coming from?' screamed the leading lady.

"But the manager silenced us all.

" 'Look here,' he said; 'if they are bound to have Hamlet they shall have him. It'll fill the house. I never saw Hamlet myself, but I know a few quotations from it, and the most they want is the ghost, anyhow. We'll go on and do anything we like—fake the thing through—and when it gets dull we'll ring in the ghost for excitement.'

"That settled it, but I own I had misgivings when I looked at the stage. We were playing in a schoolhouse, and, as there was no stage, we had been obliged to build one, from some lumber a miner had bought to add a wing to his house. He wouldn't let us cut the boards or nail them, so we laid them across some trusses, meeting the ends in the middle, and during the performance we had to exercise great care where we stepped or the end of a plank would fly up and give us an exit not down in the play.

"When the evening came there was a very nervous lot of actors behind the improvised curtain and even the manager lost a part of his assurance and would have backed out had he dared. But the miners were packed in the house like sardines in a box, and there wasn't standing room for a fly, so we knew it would not be safe to change the bill on them.

"That performance of 'Hamlet' was the rankest parody on a play ever presented to a suffering public. The miners looked on critically and tried to make out what it was all about. The manager, who was chief actor as well, stayed on the stage most of the time himself, getting off time-honored gags and trying to put a little go into his embarrassed and indignant company. I was to play the ghost, but not having seen 'Hamlet' at that time and having no idea how to dress the part I had covered myself with a sheet and swung the bass drum in front of me. As I'm rather short, my eyes just ranged across the top of the instrument. My cue was to be 'Who art thou?' but I was busily engaged in watching the antics of the company.

"They had been a little reckless in their movements and some of the boards near the center of the stage had slipped back, leaving a hole about two feet across. Owing to the drum I never saw this hole. I stood waiting for my cue in the wings, but I was thinking intently of something else when I became conscious that the manager was standing at the other side of the stage glaring angrily at me and shouting 'Who art thou?' at the top of his voice. 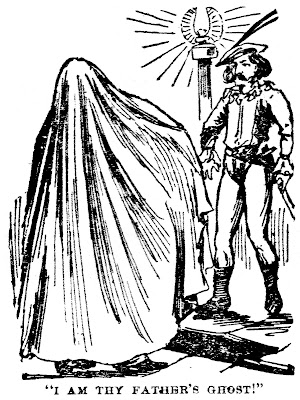 "Instantly I stepped out, gave the drum a solemn beat at each stride and exclaimed: 'I am thy father's ghost!' At the same time I unconsciously walked into the gaping hole in the stage and disappeared like a shot; but the drum remained on top while I was struggling in the darkness to gain a footing and  the crowd was shouting in intense delight at this magnificent denouement. The manager rang down the curtain and act first was concluded. They drew me out all covered with bumps and bruises, and, while the company roared with laughter and the manager thanked me with tears in his eyes for saving the piece, I tried to collect my wits and discover what had happened.

"But this wasn't the worst of it. Those cussed miners thought the accident was part of the piece, and during the next act shouted so energetically for the ghost that I was forced to go on and repeat the whole business. The third act was the same way, and when it was over my legs and arms were skinned, one eye was swelled shut, two of my front teeth were missing and every inch of my anatomy was sore. The crowd waited outside to escort me to the boarding house, where they gave me three rousing cheers. 'Tell you what,' said one of them to me the next day, as I sat propped up in bed, 'that air Hamlet is a great show. We sorter wondered why you didn't want to play it for us, but we understand now, and are grateful to you for givin' in. If ever your troupe comes here again, an' you give us Hamlet an' the ghost, you can have every dollar the town holds!'

"And that," concluded the actor, with a sigh, as he picked his grip out of the rack and put on his ulster, "is the only time I remember playing a tragic part, and yet my sold yearns for tragedy. Goodby, old man, I get out here. To-night, if you'll stop off, you'll see me once more in the grasp of relentless fate, and playing the fascinating part of Marks, the lawyer—for which sin may Heaven forgive me!"

Originally published in the Philadelphia Public Ledger, May 27, 1917.

The Wicked Stranger’s Visit to Supposyville

The keeper of the castle gate
Was wakened up at dawn;
For tapping there a visitor,
All wary, pale and wan,
Begged for admission to the realm
Of good Supposyville;
“Your name, sir?” quoth the gateman,
But the visitor kept still;
So feeling sorry for the wight
The keeper let him in;
But oh! my dears! He didn’t see
His sly and wicked grin;
Before the keeper scarce could wink
He hurried down the lane,
Banging on each door and sill,
And shuttered window pane;
The townfolk wakened in alarm
And tumbled out of bed;
And at each window and each door
Appeared a sleepy head.
“Ha! Ho!” the gloomy figure called,
“There are no queens or kings;
There are no fairies, elves or sprites,
Nor other magic things.”
(The idea!)
“Your old state is a make-up, and
It’s not upon the map;
You’re all a supposition.”
With their face quite agap
The poor Supposies listen; then
They hustle on their clothes;
“What does it mean? What can it be?
Whatever do you s’pose?”
They hasten to the palace, with
The stranger at their heels;
The King and Queen come out to see
What’s happened; each one feels
All sad and gloomy, while the person
Laughs in scornful glee;
“Pray call the wise men,” cried the King;
Out come the wise men, three;
“How dare you enter here! Beware!
Touch one man and you die!”
The first cries; while the second glares
At him with flashing eye;
“Begone from here, Dull Facts, begone;
Quick, drive him out of town!”
The third wise man calls angrily;
The kind Supposies frown,
And turning, chase that rogue, Dull Facts,
As fast as he can pelter,
Out of the kingdom, coming back
All breathless helter skelter;
Supposyville’s a kingdom of
The very realest kind;
For Supposyville, beloved,
Is a jolly state of mind.
“Not on the maps,” you say; “perhaps
‘Tis not, but each one knows
The way to get there; close your eyes
And then suppose, suppose!”


Copyright © 2019 Eric Shanower and David Maxine. All rights reserved.
Posted by ericshanower at 12:00 AM