By Ruth Plumly Thompson
Author of Ozoplaning with the Wizard of Oz, "The Wizard of Pumperdink", "King, King! Double King!", etc. 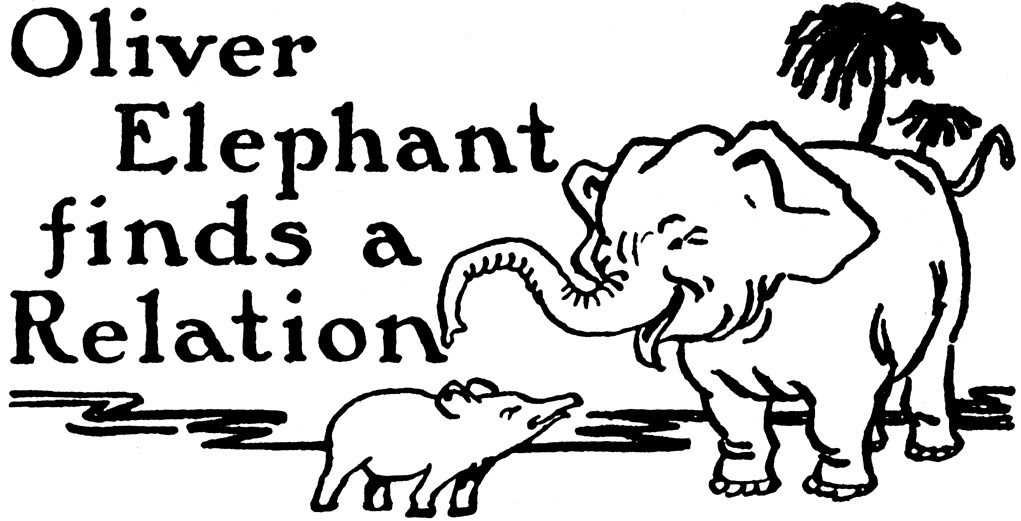 "I wish--" said big little Oliver Elephant one day, "I wish I had some brothers or sisters or SOME kind of relations! Mother, why haven't I more relations?"

"Relations!" said Oliver Elephant's mother, looking up from her knitting. "Aren't your father and I and your Uncle Abner enough?"

So Oliver Elephant went out to play, but all the way to the big forest he kept thinking about the relations he didn't have--and the more he thought about it--the lonelier he felt, and pretty soon a BIG tear rolled down his trunk and splashed into the dust. But just then--before another tear even got started--a voice from somewhere called, "HELLO, cousin!"

"Cousin!" gulped Oliver Elephant, and he put up his big ears and put down his big ears, and looked and looked and LOOKED, and at last saw two merry eyes winking at him from the underbrush. "Did you say cousin?" asked Oliver, flapping his ears with excitement, 'cause it seemed as if he were to find a relation after all.

" 'Course I said cousin!" chuckled the owner of the eyes, and out stepped the FUNNIEST little beast that Oliver Elephant had ever seen in his life. (And if you look up at the top of this story--why, you'll see him, too.)

Thomas Tapir--
Cut a caper,
Which somehow never--
Got on paper!"

He chanted gaily, winking first one eye and then the other. "What was the caper?" asked Oliver, beginning to feel very much interested in this strange cousin person.

"Why--chasing my tail!" whispered Thomas mysteriously--winking both eyes this time.

Oliver Elephant waved his trunk to and fro in perplexity. "BUT--you haven't any tail!" he brought out at last. At this Thomas turned 'round. He really had no tail to speak of, much less to chase.

"HA HA, HO HO!" he laughed, wrinkling up his long nose, "That's the reason that it didn't get on paper, cousin!" He was such a jolly little chap that Oliver couldn't help laughing, too--so they both laughed and laughed at Thomas' joke.

"I believe I'm going to like you," said Oliver Elephant slowly, after he had stopped laughing. "I think I'll call you Tommy."

"Go ahead--and do it!" said Thomas Tapir--"we're cousins--come, don't you think we look a bit alike?"

"WE-LL," said Oliver, putting up his ears, "We've got the same kind of COATS and the same kind of EYES--and if you were bigger--and your ears were larger--and your nose was longer--why then we'd almost be TWINS, 'stead of cousins!" said Tommy "My grandfather told me that we were LINKS between you elephants and our other cousins, the hogs," he added, wisely.

"Links?" said Oliver Elephant, rolling his eyes - "What are links?"

"Why, don't you know what links are?" gasped Tommy. "What DO you know?"

"Oh, all right," said Tommy, "you needn't bother telling me--but a link, Oliver Elephant, is something that comes between--see! We tapirs come between you elephants and the wild hogs and that's why we're COUSINS!"

"I don't mean that you're not handsome!" added Oliver generously.

"COCOANUTS!" said Oliver Elephant (he always said cocoanuts when he was pleased). "Let's!"

And SO Oliver and his cousin Tommy went swimming together and had a delightful time. I'll tell you some more about them some day.

No word from the Forgetful Poet this week. 'Fraid he's bumped his head or stumped his toe or something. I've sent a telegram to the camp where he's staying asking for particulars and I'll let you hear as soon as I discover the trouble.

And now, my dears and ducks and all the rest of you, tell me:

To what tree would you go for help at house-cleaning time?

To what tree would you go to complete your winter wardrobe?

What bird's home could you wear?

To what bird would you go if you wanted to bake?