The jungle school was kept by Professor Bear, who was fearfully wise, but also fearfully bearish. “I don’t believe he was ever a little elephant!” said Oliver to Tommy Tapir, one morning as they were on their way to school. “Little elephant!” snorted Tommy—“Oliver Elephant, what are you thinking about?” “Well, I don’t believe he was ever a little bear, then,” grumbled Oliver Elephant—and it did seem, boys and girls, as if the Professor was so chuck full of jungleography and junglelaw that he hadn’t much room left for heart. On this day I am telling you about he was very stern—oh, very stern, indeed!

“Sit up!” he thundered, banging on his desk with his big cane. The little monkeys and bears and tapirs, the little elephants and all the rest of them sat up with a jerk. “ATTENTION!” growled Professor Bear. “NOW! Oliver Elephant, please stand up and answer this simple problem. If I were to chop three and one-half inches off your trunk, how many inches would there be left, and just give the answer in decimals.”

“Make haste!” snapped the Professor, banging his desk again. “Make haste!” Oliver Elephant rocked to and fro and put up his big ears and opened wide his little eyes. “Mm—my father wouldn’t let you!” he burst out at last, jamming his trunk in his pocket and starting to run for the door. “Hah, hah!” giggled Katange Monkey, diving under her desk.

“This is UNBEARABLE!” spluttered the Professor, and bouncing out of his seat, he came rushing down the room. Everybody ducked and shivered and shook—and just think how poor Oliver Elephant felt! Next the Professor’s arm shot out; Oliver Elephant seemed to sail and fly through the air, and then stopped kerplump under the clock with a dunce cap smashed down over his eye—AND ALL THE BUTTONS OFF HIS NEW SUIT! (I am glad that Oliver’s mother didn’t happen to come along just then.) Tommy Tapir felt so sorry for Oliver that he scribbled a note on the back of his arithmetic paper and passed it to Oliver while the Professor’s back was turned. This is what it said: “Don’t you care!”

Oliver read the note, wiped his eyes on it (he had lost his handkerchief), then he felt a little better. It was pretty tiresome, though, standing under the clock. There wasn’t a sound in the room ’ceptin’ its ticking and the scraping of pencils, as the pupils wrote the answers to the Professor’s questions. I don’t see how they ever answered them at ALL. Could YOU have told how many knots a cobra could tie in his tail—if a hippopotamus stepped on his head?—and how many berries and a half a little bear could eat without getting the mullygrubs?—and why the grass was green instead of PINK? Could you, now? 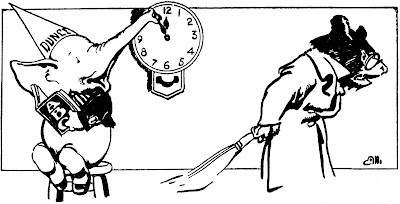 Well, while they were writing all this down—Oliver Elephant stood first on one foot and then on the other and Ooooh! but he was tired. At last he looked up at the clock to see what time it was. It said 11 o’clock. Then he found that by stretching his trunk a WAY up he could just reach the hands. And because he was pretty tired, I guess—he—what do you ’spose he did. Well, HE PUSHED THE HAND ’ROUND TO TWELVE! And just as he did—Professor Bear looked up—and SAW HIM DO IT. Whoooo! Everybody held his breath. First the Professor put down his chalk—then he took off his spectacles—then he began to shake all over. “Go Home!” he choked, waving one paw at the class and putting his other paw to his mouth—“Go home!” And they all grabbed their hats and ran home in a hurry. And no sooner were they gone before he took down his paw from his mouth and Oliver Elephant saw that he was laughing—laughing so hard that the tears ran down his nose. “Why did you do it?” he gasped at last. “Mmm—my foot was asleep!” stuttered Oliver Elephant, too surprised to talk straight. “Same reason—same reason!” chuckled the Professor—then he told Oliver Elephant how he had done the VERY SAME THING when he was a little bear. “Indeed, it takes me back to my little bear days!” said he, wiping his eyes. “And you have no idea what an old grumpus Professor Panther was!” “Good bearskins!” he muttered all at once— “I’m afraid I was a little severe this morning,” “Oh, that’s all right,” said Oliver Elephant, holding his blouse together—where the buttons had been ripped off. Now Professor Bear grew very thoughtful—then he gave Oliver Elephant an apple and sent him home to his mother.

“So you see,” said Oliver Elephant, when he was telling Tommy Tapir all about things—“he was a little bear after all!” I am glad to say that the Professor from this time on was always kind and agreeable—and never stood any one in the corner again!

Now in Supposeyville there floats
Upon the atmosphere
The pungent smell of soap and paint—
HOUSECLEANING TIME is here!
The winter coats and trousers dance
Their farewell on the line;
The windows have been polished up
And chamoised till they shine.
The men go whistling to their work;
The merry dames all sing,
And scrub and splash to heart’s content
A-welcoming the spring!
But let us take the king and queen,
While all the rest are jolly;
They both are rather cross and ill
And fearfully melancholy.
The doctor says “Spring fever!” and
Suggests a trip away;
Grand preparations are begun
By every one. Next day
When maids in waiting go to wake
The queen, no queen is there;
The king has also disappeared;
They search most everywhere,
And find at last on garden seat
A note: “We’ve gone—due east,”
It says, “by west and will
Return good folk—ANON.”
Quite puzzled, somewhat reassured,
They all resume their splashing
Their painting, dusting  scrubbing, and
Relentless water dashing.
Meanwhile the king and queen, dressed up
As ordinary folks,
Are jogging down the highway on
Two donkeys, cracking jokes;
The king points to a house—says he,
“My dearest Mrs. Jones,
Let’s rent this house; it is THE ONE,
I feel it in my bones!”
“Just as you say,” the queen replies.
That same night they move in,
Known by the neighbors as the Joneses;
And NOW the larks begin;
The queen starts in to sweep and scrub;
The king, with vig’rous brush,
Paints the house and then the barn;
And how the queen does blush,
When the king—I mean when Mr. Jones
Praises her hot-cakes—MY!
What fun they had, what happiness,
And how the hours fly.
But even the finest times must end.
The house from roof to sill
Is spotless, and they must return
To good Supposeyville.
So hunting up their crowns and gowns
They slip back in the night,
And next day are discovered by
The courtiers with delight.
Cured of all ills and quite restored,
Sometimes they puzzle folks
By referring to the JONESES—but
Then kings must have their jokes!