THE TALE OF A WEE WHITE PRINCESS

By Ruth Plumly Thompson
Author of Pirates in Oz, Ozoplaning with the Wizard in Oz, and The Wish Express, etc.

Originally published in the Philadelphia Public Ledger.
[Punctuation corrected for clarity. Racial implications do not reflect the opinions of anyone connected with Hungry Tiger Press.] 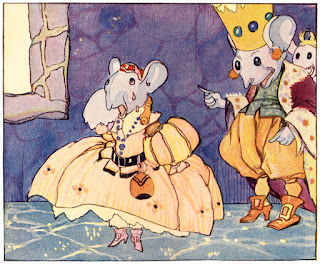 The little white Princess mouse wept in her tower—
The King and the Queen had been scolding an hour—
For suitors had come dressed in satins and lace
But the little mouse Princess averted her face! 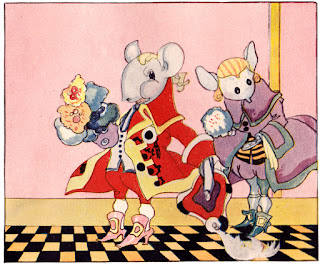 What though they had titles as long as their tails—
What though the Queen shakes her and all the Court rails,
She sees a wee cottage tucked under a hill
And by a clear brook a wee little Mouse Mill! 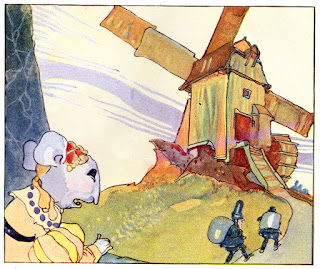 Where froggies and fairy folk come with their flour
And a little brown miller mouse looks toward her tower—
Where birds sing delightfully all the day through—
The little brook sings and the mill wheel sings too! 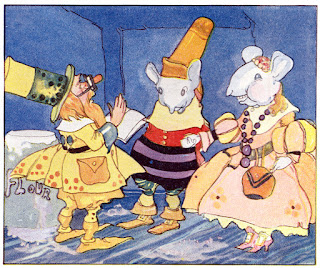 But a wee white mouse Princess may never step down
From her Princessy throne, dears—to wed with a brown!
She may not! I said, but Ho—sometimes she does—
And she did one fine day—why? Oh my—just because! 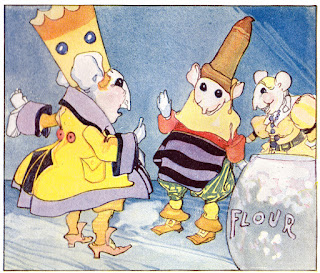 And when the King thumped on the wee cottage door
He found her as gay as she’d been sad—before.
“You’ve wed a brown mouse!” “No—Your Highness, he’s white.”
And the King looking close—saw the Princess was right. 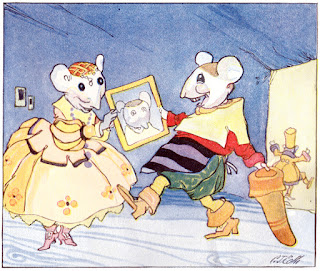 A good many people don’t say what they mean, but not very many say the exact opposite. The Forgetful Poet has developed [t]his habit lately, besides leaving out words, so that if you can guess what he means you will be brighter than we are down in this office. Unriddle his rhymes if you can, old dears.

The sun rose in the west,
And I rose in the usual way,
Put off my clothes, turned in my toes,
And wished my friends good —.

The doggie willow trees are out,
The puss-wood soon will blossom,
And Gnirps will waken down
The bears and Uncle Billy —.

Two hares caught in the brush,
I wept until my eyes were —,
You see, they were my own,
And should have stayed on top my head!

The Forgetful Poet put short for tall, bad for good, day for night, light for dark and out for in—in his last poem.