By Ruth Plumly Thompson
Author of The Purple Prince of Oz, "The Wizard of Pumperdink", "King, King! Double King!", etc.


“You make me sick!” fumed the dark-haired girl, stirring her tea impatiently. “I should think you’d be worried to death.”

“Something’ll happen,” insisted the red-haired girl cheerfully. “Something always happens. Look!” Expertly she turned her cup upside down, drained out the tea and gazed intently at the fortune the leaves had left in the bottom. “I see a tall stranger coming in the evening time. I see a roll of real bills; money, Nance, money! And here’s a foreigner handing me an honest to roses bouquet!” 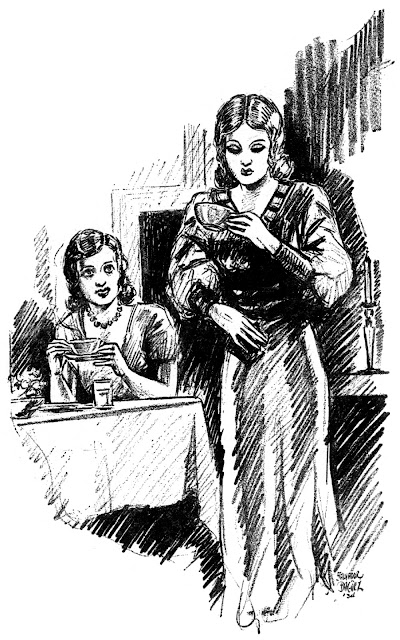 “No, just Irish!” Setting down the teacup Mollie regarded her visitor with a mischievous twinkle. But it kindled no answering gleam in the practical eye of her friend.

“Your tall man is probably a collector; your roll, a wad of gas and coal bills; the foreigner, an Italian trying to sell you a bunch of bananas.” Having cryptically spoken her mind on the subject and having helpfully eaten all the cake and toast, Nance pushed back her chair. “I’m awfully short myself, but if I can do anything—” Her voice trailed away indefinitely and glancing around with a little shudder she took her efficient departure.

As the door of the small gift shop closed Mollie allowed herself the luxury of a sigh. And well might she sigh, for between Mollie and the wide world there was but one small dime.

“Anyway, it’s new!” The girl peered anxiously into the cash drawer to see if it were still there, then walking about softly began to clear away the dishes. Beautifully enough Mollie’s adventure had started. The tiny house on the edge of the Philadelphia slums, that was to furnish atmosphere and interest, had gayly been leased. The lamp shades, jolly little dogs and mottoes Mollie had been gathering all summer took their place on the shelves of the small front room that was the shop.

At first all had gone well. Friends attracted by the novelty of the location and by Molly’s gay self came in troops. But alas, more to talk than to buy. An overstock of Christmas novelties, and understock of cash, an unexpected flood of bills, a sudden falling off of customers, and Mollie found herself in mid-January with no capital to renew her wares and not even enough money to pay up her debts and return to the small town from which she had set out so bravely to make her fortune.

As for the neighborhood that was to have furnished atmosphere and interest, it exhaled instead and awful elixir of smoke, garlic and garbage. Too proud to admit defeat, Mollie held her small red head high and vowed to herself that she’d stick. But today, in spite of her gay jests, Mollie’s spirits had begun to droop and there was a tiny panic in the mere thought of tomorrow.

“Some folks,” murmured the girl whimsically, “some folks, cat dear, might call this tea, but tonight we’ll be calling it dinner!” Jock, huge and black, waved his tail just enough to let Mollie know that it was all right with him, then leaped into a chair and surveyed the table hungrily.

“She’s left you no cake and precious little milk, but don’t you care; tomorrow you shall have a fine fish!” As if reassured by this brave promise puss gravely lapped up his saucer of milk and Mollie, having finished her task of clearing away, lit a bright candle and set it in the tiny window. “To light luck to our door!” she whispered rather wistfully into the silky ear of Jock, who had curled up on the counter. “Something’s going to happen, cat dear, something has to happen!”

But the long winter afternoon slipped gayly by and nothing did. Footsteps went maddeningly up and down the narrow street, but no one turned in to inquire the price of the peasant dolls in the window nor to buy a tea cozy for Aunt Susan. As the shadows grew longer and longer Mollie’s sewing dropped into her lap and she gazed pensively out into the dusk. A soft slap against the door made her jump up and, scurrying across the room she flung it open.

“Why, it’s the foreigner!” chuckled Mollie as a swarthy youth distributing samples nodded pleasantly from the next step—“and the roses!” Scooping up the small box of breakfast food Mollie ran back into the shop. “The milkman still trusts us and here’s breakfast, Your Honor!” Waving the bright package at the cat and unnaccountably cheered, Mollie skipped back to her sewing. Even the candle seemed to flicker more brightly after that, and when a moment later the latch of the door was lifted and a tall stranger strode in Mollie was not even surprised.

“It’s himself!”  breathed the girl softly. The stranger removed his hat and cleared his throat in the manner of a man who has disagreeable work ahead of him.

“Expecting me!” The stranger eyed her uncomfortably, then took a quick survey of the shop.

“Sure, and I saw you in my teacup!” Leaning her elbows on the little counter, Mollie’s merry blue eyes smiled into the anxious brown ones.

“But you see—” The brown eyes grew more anxious still, and fumbling in his coat pocket the young man brought out a bundle of paper. “You see, I’m a collector and this—”

“I knew,” confided Mollie, clasping her hands in delight, “I knew the minute I set eyes on you that you were a collector. Would it be antiques or pictures that you’re collecting?” With a slight gasp the young man returned the wad of papers to his pocket and after a long look into Mollie’s vivid little face decided that it would be pictures.

In a flash Mollie had whisked to the back of the shop, returning in a moment with a small, dingily framed landscape. “We haven’t many right now, but this—this goes so to the heart!” Snatching the candle from the window Mollie held it close to the painting. First the young man looked at the landscape and then at Mollie. And whether one or both went to the heart it was hard to tell. Reluctantly at last he tore his gaze from the girl and fastened it again upon the landscape. To his amazement he discovered it was a good picture. Great Scott, more than that! Taking the candle from Mollie he examined it with growing excitement.

“Where did you get this?” His voice was so sharp Mollie jumped. At first she was inclined to make up a beautiful story about it being in her family for years and years. But something in the earnest brown eyes brought out the truth. A young English chap, confided Mollie, who had rented her second story for a studio and then gone on the rocks, had left it instead of rent. 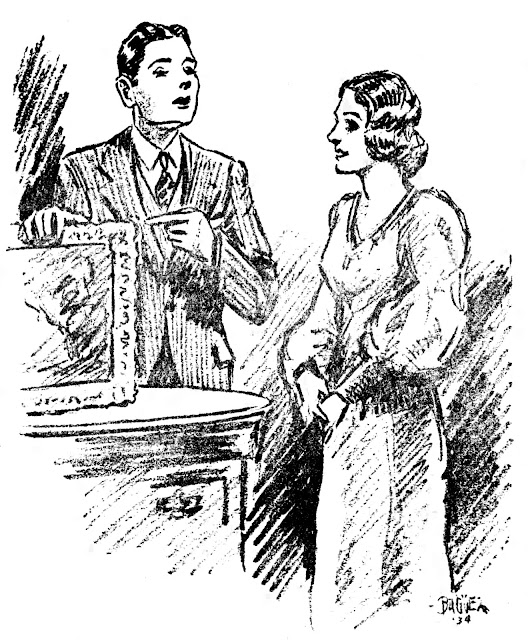 “Some rent!” The young man gave a low whistle. “Do you realize, young lady, that this is a genuine Corot? Look at the signature! I know a lot about pictures myself, but I’d like to show this to a friend of mine. Do you care?” Puzzling over just what a Corot might be, for Mollie’s knowledge of art was rather of the lamp shade and embroidery variety, she shook her head, and the stranger, muttering incoherent promises, rushed out of the shop.

Would she? Mollie clapped her hand to her head and sank wearily into a chair; then as the tall stranger signaled vigorously for her to accept the man’s offer she nodded her head. “But the English lad shall have half,” murmured Mollie in a daze of disbelief. And now the fur-coated angel had actually made out the check and gone and Mollie and the tall stranger were alone.

“Well, Miss King,” sighed the collector regretfully, “I suppose I must be going too.” But there was no conviction in his voice nor in the bewildered nod Mollie gave to this statement. And seeing her so puzzled and happy, what was there for him to do but stay and tell her a bit about the life of Corot, the artist chap, and from that how easy it was to drift into the life story of another chap, who was doing quite well in the collecting line, working his way up through the various departments of his father’s firm.

Indeed it was hours later that the door of the little shop really closed behind him and not then, till he had added another picture to his collection, the picture of Mollie herself that had perched so saucily on the mantel beside the Dutch clock.

“Well?” The matter-of-fact voice of Nancy made Mollie look up with a start from her account book the next morning.

“Woman!” cried Mollie, dancing across the shop. “It all came true!”

“What came true?” Nancy stared in amazement at this new and exuberant Mollie.

“The fortune! Girl, dear, the fortune!” Snatching the check from the drawer Mollie waved it over her head, and it was quite fifteen minutes before Nancy had the story straight.

“Maybe!” Speculatively Mollie chewed her pencil, glancing sideways at the empty spot beside the Dutch clock. “Maybe, but I’m thinking perhaps there might be other plans.”

And let it be said that “other plans” were indeed actively brewing, at that very moment, in certain other quarters.


The Secret Sorrow of the Queen

The daffodils are nodding
In the gardens and the hedges
And showing Spring’s first signal greens
Along their blushing edges.
The air is soft and teasing and
All in Supposyville
Are happy, ’cepting one, the Queen—
The lovely Queen is ill.
The sweetest singers cheer her not,
The garden makes her sigh,
And when no one’s about to hear,
She murmurs sadly, “WHY?”
The doctors first look at her tongue,
Next listen to her heart,
Then feel her pulse and shake their heads
And solemnly depart.
The wise men come in tens and fives,
The poor King is distraught,
And everywhere throughout the land
A remedy is sought.
But just as things are at their worst
A wrinkled dame declares
She’ll cure the Queen—Nine footmen tall
Conduct her up the stairs!
She whispers but one word. The Queen
Sits up and claps her hands;
Out from her apron comes a box—
“BEGONE!” the Queen commands.
The twelve attendants go at once,
Then trembling with delight
She opens the box and, dears and ducks,
The wise old dame was right!
A lovely bonnet, dainty as a
Rainbow after showers,
She’s brought a new spring bonnet,
Ribbons, bits of lace and flowers!
“I don’t mind my crown in winter!”
Sighed the Queen, “but in the spring
I’ve got to have a bonnet. Now
Do you suppose the King
Would mind if I put by my jeweled
Crown until the fall?”
“Of course he wouldn’t, dearie.
Why, he wouldn’t mind at all!”
Just then the King himself appeared—
I can’t describe the way
The Queen looked in that bonnet—
First the King had naught to say,
But gazed in speechless wonderment.
“You’re twice a Queen in that!
Sweet Pozy, put your crown away
And wear that lovely hat!”
And now on fair and balmy days
Queen Pozy wears her bonnet
Which is quite as it should be, dears,
The more I think upon it.
And all Supposyville kneels to
The bonnet, bending down
Thrice deeper than they ever bent,
Sweethearts, to her gold crown.

Copyright © 2019 Eric Shanower and David Maxine. All rights reserved.
Posted by ericshanower at 12:00 AM