Adapted and Illustrated by W. W. Denslow
Author of The Scarecrow and the Tin-Man of Oz, and illustrator of The Wonderful Wizard of Oz, Dot and Tot of Merryland, Father Goose: His Book, etc. 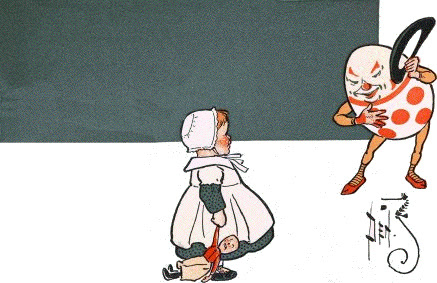 You all remember how Humpty Dumpty
Fell from a wall and was so much bumped he
Couldn't be possibly patched again
By all the King's horses and his men.
But maybe you never heard tell he left
A dear little son of his care bereft,
A round little chap with a smile so wide,
And a great gold heart in his little inside.

Of getting along his chance was slim,
Till an old hen mother adopted him.
She made him snug in a straw filled nest,
And covered him up with her feathered breast.
But he wanted to go, this adventurous lad,
And see the world, as his father had. 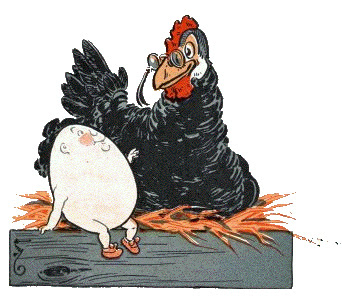 "All right," said the Hen, "If you wish to roam,
Take my advice ere you leave this home.
You'll probably climb on great high walls,
As your father did, and you may have falls;
And likely as not you'll break your leg,
Or get smashed up like a scrambled egg.

"I know a way to avoid all that.
Go to yon farm house, quick as "scat,"
And ask of the housewife if she's got
A kettle of water boiling hot.
And if she has, why, you jump right in,
Although the water will scald your skin.
Stay ten minutes and then jump out,
And you will find when you run about
You can tumble and roll to your fullest bent,
And never receive a crack or dent." 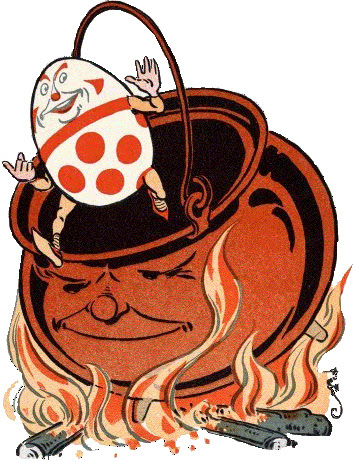 So Humpty Junior, as good as gold,
Took the advice as he was told,
And jumped right into a copper pot
Of water steaming and boiling hot.
And there he stayed, though it hurt at first
And he felt that his little skin would burst.
But courage to him the thought would lend
That he was dodging his pa's sad end.

After awhile he tumbled out
And started at once to run about.
He frolicked and leaped in ecstasy,
He rolled and he stumbled, just to see
If his head he'd break, or his skin be spoiled,
And he cried, "Oh, joy, I am quite hard-boiled!" 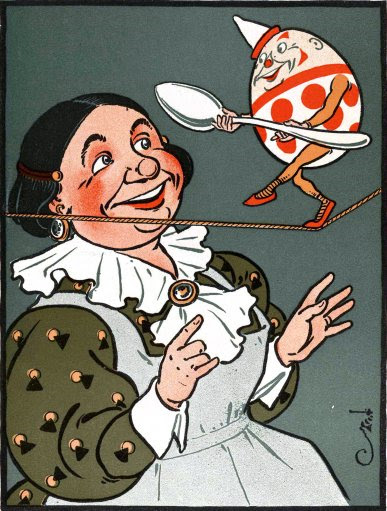 His heart, he found, wouldn't rattle 'round
When he fell from a table to the ground,
And he giggled to find he would not smash
When he jumped from the mantel with a crash.
Oh, tickled indeed was Humpty D.,
The happiest egg you'd ever see!

The last I heard of this hard-boiled chap
He was hardened to every knock or rap.
And tumbling 'round with a gladsome whoop
As acrobat in a circus troupe.
And he'd say, "I lay my success in life
To the good old Hen and the Farmer's Wife,
Who taught me early the only way
To get along, which I'm pleased to say,
Is good advice for both eggs and folks,
People with hearts, or eggs with yolks. 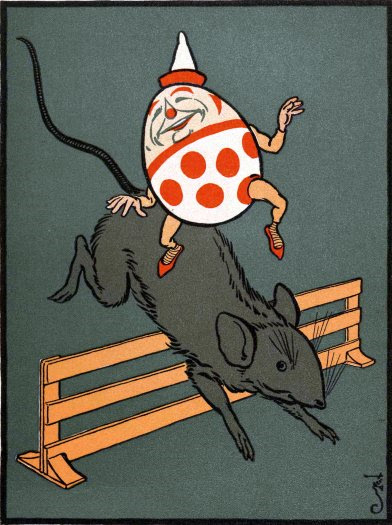 A fresh egg never can prosper 'steady.'
Don't leave home till you're good and ready."

The Forgetful Poet stubbed his thumb and cannot send in any puzzles, but when his head is better he will send some. That's just what he said, so you needn't blame me if it sounds funny.

Last week's answers were: A potato has a jacket, but no vest; a wave has no family, yet a crest; mines are like peaches because they have pits, and battlefields like beaches because they are strewn with shells. The Kaiser is like a prune because he has a stone heart, and a Scotchman like a dune because he is full of sand. And here is a puzzle I made up my ownself:

What runs up and down and yet stands still;
Why is a man's face like a hill?